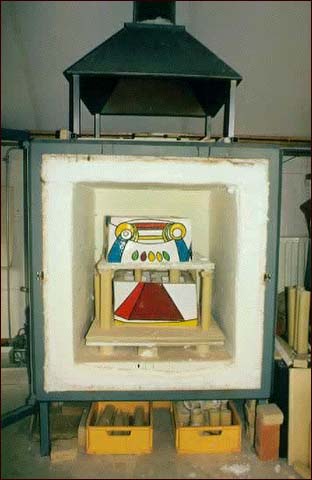 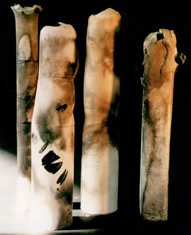 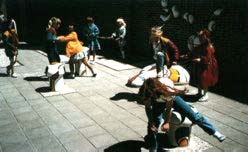 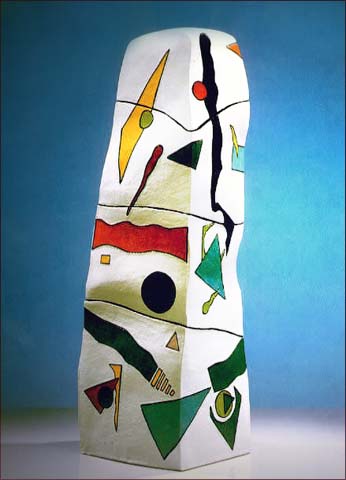 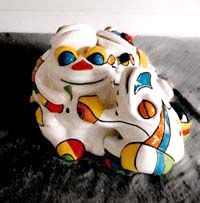 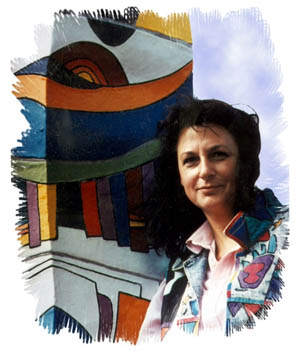 If the monumental ceramic of Jackie Bouw can be described in one word, then it is 'vitality'.

This strikes you from the very first glance. Form, colours and symbols are used to stimulate one's senses and fantasy.

One is even physically moved; the epic composition of her sculptures invites one to walk around them.

Vitality is a natural part of clay.
It is pliable, you can remove something from it and add something to it.
You only need to hold clay in your hands to feel its endless potential for a shape.
You can express yourself directly through it, just as with written and spoken language. It allows you to give immediate form to any first impulse inside you.

This is why Jackie Bouw, since her earliest childhood, has felt an attraction to clay.
Add to this that other fascinating element, fire, and you can see why she is irresistibly drawn to ceramic.

For a number of years she follows diverse training courses and various workshops.
In this way she is able to bring her knowledge, technique and mastery of form up to a high standard. In between she takes an interest in another form- discipline, sculpture, which brings her into contact with wood, stone and steel.

These she also finds fascinating, but she soon discovers certain limitations inherent in the use of these materials. One wrong stroke on a block of granite for example, means that an idea cannot be realized, something unacceptable to a perfectionist such as Jackie Bouw who can never be satisfied with a misshapen image.

Clay offers her the chance to work out an idea completely and down to the smallest detail.
In the process, an exchange between artist and material occurs; the ceramic both strengthens and sublimates her mental concepts.
And the inspiration which arises out of this shapes her as a person. Clay is for her the ultimate means of expressing and shaping.
Initially, Jackie Bouw makes small objects related to traditional pot forms, with the cylinder as basis form. Later, she applies herself to the production of large, pillar shaped sculptures.

When teaching, she delves even deeper into the subject and history of ceramic. She is one of the first ceramists in the Netherlands to practise the Raku-method.
This ancient Japanese form- and firing technique offers her the chance to interact with fire more directly, to get even closer to the dance of the flames. During the first ten years of her artistic career, Jackie Bouw concentrates upon technique and on the essence and possibilities offered by the material. Her colours are dear and modest. Her forms appear withdrawn, directing the attention inwards. In this way her work absorbs the attention of the viewer.

With the growth in her technical skills and form control, her work becomes more centrifugal, more a personal expression. In order to increase the expressiveness of the form, she uses primary colours which radiate a cheerful brightness and a living optimism. In this way she establishes for herself a new kind of handwriting.

She utilizes compositions with primary colours for the first time in a work she is commissioned to do for a school playground in the harbour area of Amsterdam.

The drabness of the grounds and the harbour nearby inspire her to design large, brightly coloured ceramic wallflowers and play objects in the shape of boulders. These exude a powerful attraction; children climb on the sculptures and are continually touching them.
This is one of her aims as an artist: not only to caress the eyes and stimulate the fantasy, but furthermore, to stir the sense of touch.

The summer of '85 is a turning point in the artistic life of Jackie Bouw. One day, during a vacation in Bretagne, where she is recovering from a serious illness, she finds herself walking on her own over mud flats. The plodding through the sticking clay in that wet and peaceful oasis does her good
Suddenly, she runs into a row of wooden poles put there to protect the land against the destructive flow of the water. This apparently insignificant confrontation with these natural lifeguards, set in the almost mystical atmosphere of the immense clay flats and combined with her returning physical powers, makes a deep. impression on her. or her it brings with it a recognition of life and the rediscovery of her own vitality. Jackie Bouw abstracts from the essence of this experience in her "Windbreaks", sculptures which are grafted onto wooden poles. Here she tackles for the first time the challenge of extremely large formats or is it rather, 'small constructions'? (What's in a name?)

The shapes of her "Windbreaks" appears to have been formed by nature; they carry the traces of wind and tide. The peaceful interplay of lines in the objects reminds one of still landscapes. Indeed, rather than "Windbreaks" being in the landscape, it's the landscape which is in 'Mindbreaks'. This amazing interaction with the real world is reinforced by the use of bright and cheerful colours.

For the construction of "Windbreaks" she uses a unique material and special technique.
To protect the sculpture against the effects of the weather and in order to restrict the shrinking and stretching tensions of the large sections, she arranges for a special clay mixture to be made up.
The clay is pressed in 2 cm thick layers against an internal structure of polystyrene. After the construction, lines and drawings are inscribed into the clay and the sculpture is cut into segments. In much the same way as biscuits are baked, the white and black base glazes are applied and afterwards the segments put back into the oven.
Then come the glazes for the primary colours, which require a different firing temperature. After the third baking, the segments are glued together on-site to form Windbreaks, there to await a festive unveiling.

The evolution of the form and idea of Windbreaks by Jackie Bouw is a gradual one.

Inspired by her travels through, amongst other places, Africa, America and Indonesia and by meeting other cultures, Jackie Bouw has developed a new sculpture language.
The rich surplus of travel experiences compel her to be continually narrating and imagining.

The existence of the "Totems" for example, is at least partially the result of her meeting the Pueblo Indians in America. In these sculptures she composes on the basis of her memories, observations and travel impressions, Vitality is the theme.
The designs express blooming, movement, life. They are, to be sure, intuitive and rich in personal symbolism yet always remaining accessible, comprehensible. From left to right or from top to bottom, from the one side of the sculpture to the other, angles appear which offer amazing new perspectives in the story of the sculpture.
In the totems, idea, content and expression come together in one form.

Jackie Bouw's handwriting is also recognizable in other sculptures which she has been commissioned to do. Her "frogs" is a good example of this.
These too possess that cheerful, exuberant radiance. Here too the viewer will experience the invitation to touch the thick, warm shining glaze; to feel.

She strives to reach as many of the senses as possible: forms and colours strike the eye and set the fantasy in motion and the shine of the material stimulates the sense of touch.

In this way Jackie Bouw wants to communicate her vitality to others. For years to come!